When a Plastic Bag Ruins Your Day

When the air conditioner isn't running on Noeta (N5020) in Mexico, the pilot house remains at a toasty 97 degrees in the summer and the other rooms aren't far behind. So when the AC overheated again this week, we were more than anxious to find the cause.

We started troubleshooting by cleaning the strainer and trying the trick we learned last month when it quit: turn the unit to heat mode (because heating the boat up extra warm is sure nice in July), triggering a valve that controls which way the coolant flows. Sometimes that valve can get stuck. Switching to heat and back to cool can correct that valve.That worked last month, but not this week.

Pat then thought it might be the water pump or the impeller in the pump since 3 out of the 4 units weren't working and we had just a minimal amount of raw water (sea water) running through the system.  So he sent a picture of the pump to Jay at Yachtech who has helped us get quite a bit of work done on the boat and his response was: 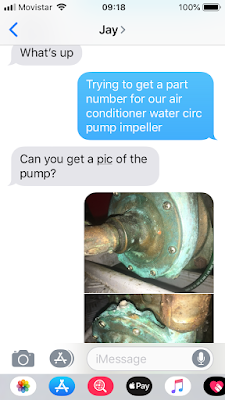 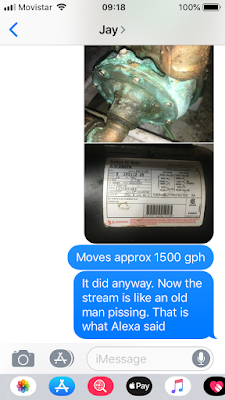 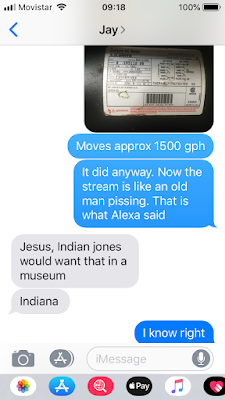 After that exchange, Jay suggested cleaning out the hoses with a closed loop system and a descaler. It was likely that there were barnacles and maybe grasses growing in the system that was slowing the water flow.

This process is one where:
1) We went to 2 stores to buy 3 different hoses and the only decalcifier we could find (we now have 13 extra meters of 1 inch hose if anyone needs some). 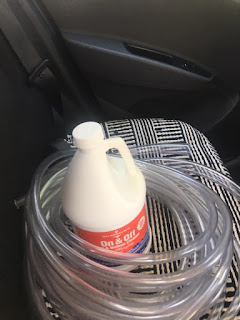 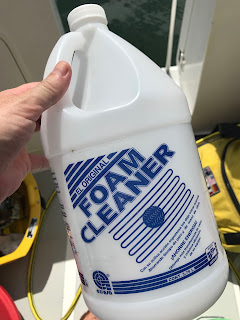 3) Pat spent a few hours with a heat gun, Dawn dish soap, a headlamp and a big wrench trying to take off hoses that have likely never been removed, under floor boards that don't come up, in corners of the boat build for a 5 year old. Pat is pretty sure they built the boat around the AC unit and hoses.

4) He then used our shiny new hoses to run fresh water with the pink liquid from a (Seahawks) bucket through all 4 AC units and back into the same bucket - making a closed loop. 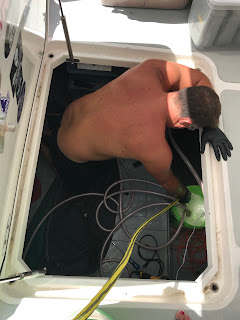 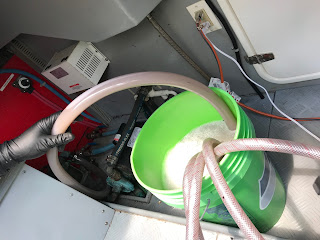 5) We would turn on the AC, let it run, turn it off and let the liquid sit in the system for awhile and then turn it back on again.

6) Black gunk was coming out of the hoses for an hour. We had great water flow so we knew the pump and motor were working, so growth-clogged hoses must have been the problem. We knew it was decalcifying because initially there was a ton of foam, indicating that there was a chemical reaction with the barnacles. After running the pink liquid solution through, we ran 15 or so buckets of fresh water through the unit.

We did find that our 2 meter hose that was sucking the water out of the bucket and into the units wasn't reinforced enough. After a few times, the hose started collapsing on itself. Note for next time - get a stronger hose.

5 hours later, we were finally ready to put the system back together again. Hoses back in place, thru hull back open and system turned on and.....S(!#....low water flow and the system over heated. Decalcifying didn't work!

Now those of you with boat AC systems have probably already thought about this, but we realized, since the pump worked and there was no growth in the system that the only part of the system left, was the thru hull. This is the opening under the boat where sea water is drawn in to cool the freon that then cools the AC. The thru hull must be blocked or clogged with growth.

After talking with other boat owners at the marina, many say they don't dive on their own boats here at Paradise Village, due to possibility of electricity in the water. I was also concerned with all swell motion of the boat against the dock. In our slip we drift away from the dock and back with quite a bit of force. I wouldn't want to come up between the dock and the boat at the wrong time.

So I texted Armando, who has a staff who cleans the hull of our boat. Of course now it's Saturday evening, we are hot, not pleased and somehow had skipped lunch during this process. We sat down to sulk just as Armando texted back, "I'll be there in 10 minutes". I can't say enough about the customer service down here. Armando shows up with one of his workers and a nice older gentleman who was probably his dad. Within 4 minutes, we pointed where the thru hull was, the diver went down and we suddenly had a huge flow of water coming out! The diver popped up with a plastic bag and some sticks in his hand.

The diver said the plastic bag was pretty far up the thru hull, but had gotten stuck in the grate, so he could pull it out. When I asked what I owed him, he said $10. We sent them back to their families a few minutes later with the $10, a tip and beers that they refused to drink on the dock with us, because it wouldn't be professional.

1) Start with the simplest fix. We could have started with the thru hull, but hey we wouldn't have learned how to descale the AC system.

2) We should probably put a new AC pump on the list of things we should get. It turns out the strainer that comes with it, that is also deteriorating, was made in China and is discontinued, so we can't get parts for it any more. So a new strainer is also on the list.


3) We now know how to descale the AC system if anyone needs help. We even have extra hose and some Seahawks buckets you can borrow.

3) Keep Armando's number handy. Highly recommended if you're in the PV area: 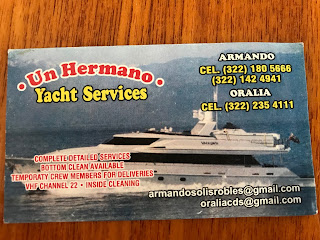 It's nice and cool on the boat now. It took a small army from the nice guy at the marine parts store who told us about the Pink Liquid, to the neighbor who gave us some, to Jay and his words of sarcasm, I mean wisdom, to Armando and crew. Thanks everyone!
Labels: Written by Alexa
Location: Paseo de los Cocoteros 1, Bahía de Banderas, 63732 Nuevo Vallarta, Nay., Mexico