Warning: Technical post by Pat ahead!
Boats are anywhere from a simple-no electronics-no engine skiff, to a ship.  A Nordhavn is closer to a ship than a simple skiff.  Which means it has many systems.  All of them need some love from time to time. The past few months, Noeta's electronics system has needed lots of extra love.

When we bought Noeta, our Nordhavn 50, we decided to invest in some electronics upgrades.  We decided this after cruising her down the east coast of the United States and saw what she had, and didn’t have.  We also realized the old Raymarine electronics were outdated and were failing in the most basic of ways.  The chartplotter screens were delaminating, parts were no longer available, and of course, there are newer and cooler systems out there. So we upgraded to Furuno TZT equipment and a ship's computer running Coastal Explorer.  I felt it was important to have a separate stand-alone navigation system.

We also installed a NMEA 2000/N2K backbone.  This is simply a “new” networking platform that has been around for a long time.  The nice part about the N2K system is that it can be plug and play.  There are some exceptions.  There can be issues when the system gets a lot of sensors on it and they are looking for information “packets” and those packets collide with other sensors info.  So you have to make sure each sensor is sequenced correctly so everyone on the network is happy. Ours, for example, has 12 items on it.  Not huge, but getting up there.

We recently had this issue of the sensors not being sequenced correctly.  Our Airmar 220WX weather station started freaking out.  The GPS signal would blink and the weather data was crazy weird.  I knew it was hot, but not 128 degrees outside.  When the GPS signal was flashing on and off, all the other components in the network that were looking for the GPS signal, would get confused.  When chartplotters, AIS and the autopilot are not happy, that usually means they are all flashing and chirping some sort of error message.  It was loud...really loud.  Fortunately we were at the dock when this happened. 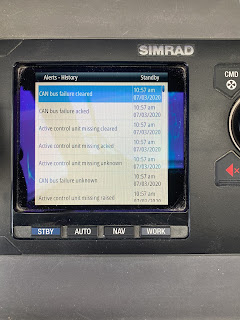 I figured out where the issue was through some basic troubleshooting.  I discovered the weather station and a Furuno GPS antenna were not providing information on the NMEA 2000 backbone.  I could see this information in several places.  The Maretron DSM250 showed who was playing and who was not.  So with this info I figured out the common point for these sensors were a couple of  N2K “T” connectors in the exhaust stack.  At first I thought I had solved the problem, and was a repairman god, simply by spraying some contact cleaner on the pins within the plugs and connectors.  That worked for about an hour.  After a few more feeble attempts like this, it turned out the fix was not quite so easy. 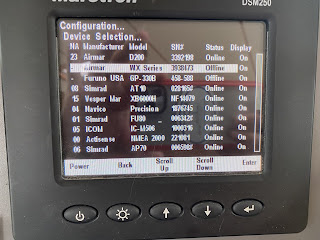 I took the plug apart and it was rusty.  Not just corroded, but rusty.  No wonder nothing worked.  I think water was getting into the stack and running down the cord and into the main backbone plug.  It basically filled the plug with water. 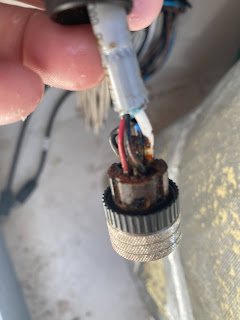 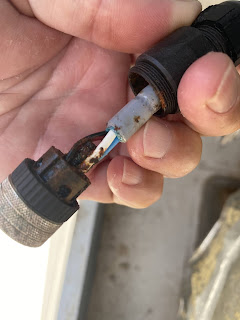 The plug was a field installation plug.  Guys will use this so they can custom cut the cord length or if the wire run is a challenge.  I decided to install a factory cable and plug.  As anyone with a boat knows, that also meant running the cable too.  That is always a lot of fun and involved removing a couple ceiling panels in the wheelhouse.  Once that was finished, the network finally appeared to work...IT'S ALIVE!!! 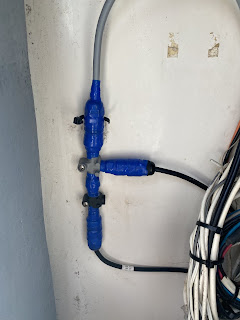 The biggest issue that I found with the N2K system was simply that if one component on the backbone fails, it can render the whole system useless.  Our GPS, AIS, and autopilot system are on the backbone.  That could have been exciting on a long open water passage, so knowing where the weak points are in your system are critical.  Suggestion: Have spares, which I now have lots of.  And know how to identify the issue so you can isolate or bypass the bad sensor.
Check out more at www.mvnoeta.com
Labels: Written by Patrick