Around ten years ago at the Seattle Boat Show, Pat and I saw a Sea Shepherd booth. Super excited, I hurried up to the nice folks working the booth, donated, told them I loved Whale Wars and bought my first Sea Shepherd hoodie. After having watched their work protecting whales on the TV program, Whale Wars, I became a fan. This weekly documentary (2008-2015) on Animal Planet shows Sea Shepherd's efforts to save the whales from Japanese whaling efforts off the coast of Antarctica. Thanks to their work, Japan's Antarctic whaling program was declared illegal in a UN court of Justice in March of 2014.
But the work isn't finished....In 2021, Japanese whalers set sail to hunt 171 minke whales, 187 Bryde's whales and 25 sei whales (bbc.com). Whaling is illegal in most countries, however Iceland, Norway, Denmark (Faroe Islands) and Japan still actively engage in whaling. Over a thousand whales are killed each year for their meat and body parts to be sold for commercial gain (us.whales.org). Sea Shepherd is still working to change that.
But working as whale protectors was all I really knew about Sea Shepherd until last year...
Fast forward to March 2020
Covid was just ramping up and our little marina in La Cruz was emptying out. Pat and I were out on a walk when we saw a vessel that looked like a spaceship cruise into the fuel dock. As we made our way over to it, we spotted the Sea Shepherd logo along the side and headed straight for it. We snuck down to the fuel dock to snap some pictures of the Brigitte Bardot and I completely fan-girled over it. We didn't want to bother the crew, and I'm sure we looked like stalkers, so we headed home, hoping they would stick around for awhile.
Well, they did. It turns out, the Bardot was being retired and La Cruz was to be her last Sea Shepherd port while they worked to fix her up and sell her. With Covid shutting the world down, we didn't get to know more about her until a few months later when we met Rob, the ship's manager, at a Day of the Dead event. When we spotted his Sea Shepherd t-shirt, we immediately figured out he came from the Bardot and invited him for a drink. We now know he wasn't super keen on joining us - we could have been crazies or just overzealous fans (he knows better now:), but he did join us and we are so glad he did.
I volunteered to help Rob out as he was the only crew member at the time. I ended up as a chauffeur, translator, tour guide, concierge and bar tender for Rob. He is a passionate volunteer who is as genuine as they come. Over time, I learned about Sea Shepherd's mission beyond Whale Wars and became an official on-shore volunteer.  With some other local on-shore volunteers we started a booth at our local market, selling merchandise and educating tourists and locals alike. It was a huge success. People either came up to us and said 'I know you from Whale Wars!' or 'Tell me more about Sea Shepherd', but people were always excited to know that we were working to save the oceans and everything in it. 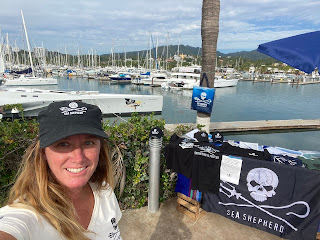 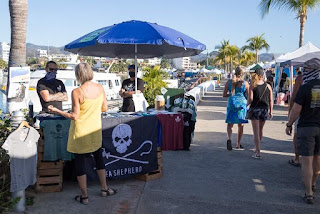 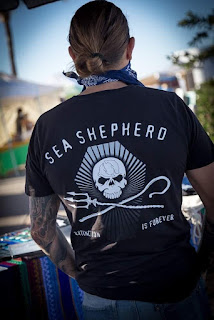 A big part of market was education. At market, movie nights and through speaking engagements, we were able to share how Sea Shepherd is an international non-profit marine conservation organization that engages in direct action campaigns to defend wildlife and conserve and protect the world's oceans from illegal exploitation and environmental destruction. (seashepherd.org)
What is Sea Shepherd doing in Mexico?
While we have a fleet of 12 vessels (and several smaller boats) around the world, many of them are a part of Operation Milagro in Mexico's Sea of Cortez. Here in Mexico, Sea Shepherd is working in partnership with the government and military to protect the Vaquita refuge. This sanctuary is a federally protected area in the north of the Sea of Cortez where illegal fishing with gillnets have brought the population of the Vaquita porpoise down to fewer than 20, some scientists even say there are closer to 10 left in the world. The vaquita porpoise is considered the rarest and most endangered marine species in the world, coming in at just 140-150 cm long. Called the 'Smiley panda of the sea', this porpoise is killed as a result of being bycatch (marine species caught unintentionally while fishing) from poachers illegally fishing for the totoaba fish, called the 'Cocaine of the sea'.  In addition to the vaquita dying as bycatch, turtles, sharks, dolphins, birds  and other marine life are also dying as a result of the use of gillnets.
The black market price for the totoaba fish (poached for its bladder as an unproven aphrodisiac) is high in Asia, $20,000 - $80,000 per kilo. This price drives the poaching of totoaba and killing of bycatch that is happening here in Mexico. "Six ships from the Sea Shepherd fleet – the Martin Sheen, the Farley Mowat, the Sam Simon, the John Paul DeJoria, the White Holly, and the Sharpie – have collectively removed over 1,000 pieces of illegal fishing gear from the refuge to date, directly saving the lives of over 4,000 animals and giving the vaquita a fighting chance at survival." (seashepherd.org) Find more information about Operation Milagro at: https://seashepherd.org/milagro/
Ships at Port
While other SS vessels have come through La Cruz in the past, the Brigitte Bardot was the first of the fleet that I became familiar with. I got to spend the last six months with her. She is a unique 109 foot high speed trimaran, originally named Gojira, that has been with the fleet for 11 years. Watch Sea Shepherd's video to see some of where she's been over the last decade. Link: https://youtu.be/giqdilLNcNs
Brigitte's Farewell!
A couple of us got to be a part of her send-off when the captain asked if I would act as a bow thruster with my dinghy and help push the Bardot around a breakwater if needed, to counter any wind or current. Then we needed to head out into the bay and collect the last of the SS crew as she headed off with her new owners. The event ended up being more exciting than I had hoped when the boat sped up just as I was coming up on the ship. We almost ended up under one of her wings. We got it all on film thanks to volunteer Sandra and my cousin Carson and Jamie who were out there with us.  Check it out! Link: https://youtu.be/5lFLje5Bx0M
More recently, the ketch research vessel Martin Sheen arrived for some maintenance at our shipyard. The scientists on board this 90 foot research vessel have studied micro plastics, humpback whale migration patterns and populations, salmon farming issues and marine oil spills. The more we know, the more we can work to save the oceans.
The People
I have a lot more Sea Shepherd gear than just the one hoodie now, but one of the greatest things I've gotten out of my time as a Sea Shepherd volunteer is meeting all of the passionate people from around the world. The great work they are doing gives me hope that we may be able to save the oceans before it's too late.

And then there's Rob...he's the person who brought me into the organization. He walks the walk every day of his life. The oceans are lucky to have him.
What can you do to help? Glad you asked!
Educate Yourself! Watch films like Sea of Shadows (National Geographic) which highlights the struggle to save the Vaquita in Mexico. See Seaspiracy (Netflix) to learn about how we are overfishing and destroying our oceans and what you can do to help.
Volunteer! All sorts are needed! Chefs (vegan on board), media, boat captains, electricians, deck hands, on-shore volunteer etc. Check out https://seashepherd.org/get-involved/ to see how.
Eco-Crime Watch - Let SS know if you observe illegal activities of marine wildlife. You could give valuable clues to criminal investigators.
Donate! Through one-time donations, monthly, memorial, 'Ocean Warrior' events, crypto currency, Paypal, gift certificates, matching gifts, estate giving etc, SS makes it easy for you to financially support us!
Reduce, Reuse, Recycle - protect our oceans! Clean up beaches, live sustainably, avoid eating fish, reduce single-use items. Make small changes in your daily life to help the planet.
Buy Merch! Check out https://shop.seashepherd.org/ to see what they have! Or come see us at the La Cruz market next season! 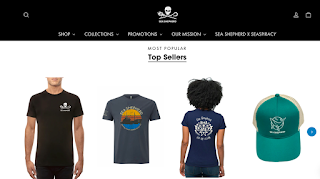 Read more about our adventures on www.mvnoeta.com
Labels: Written by Alexa