Recently we finalized the process of becoming permanent Mexican residents. This doesn't cancel our residency or citizenship in the United States, just changes our status in Mexico from tourist, where we have to leave the country every 6 months, to resident.

Originally I was hesitant, we didn't really NEED residency. On our 180 tourist visa, we already owned and registered a car in Mexico, we already had a Mexican bank account and traveling out of the country every 180 days was relatively inexpensive for us with Pat's travel benefits and our location.

However, we've been in Mexico nearly three years and the folks at the airport, who know Pat so well because he flies out weekly for work, were starting to ask if he was 'Mexican' yet. We plan on being in Mexico for a number of years still, so we began to realize that completing the process to become residents was the right thing to do. For me it became even more important when I returned to Mexico last month and was at the back of the Tourist line for immigration at the airport. For over 2 hours I watched the Resident line sit mostly empty, wishing I was in it. We started the process just a few weeks later.

We recognize our privilege in being able to complete this process and the grace with which every Mexican government employee treated us. We appreciate that Mexico has a system in which we can become residents and be contributing members of their society. It is not lost on us, that for most Mexicans, becoming a legal resident in the United States is out of reach, complicated and expensive.

The Process in the United States

The process to become a resident has to begin at a Mexican consulate in one's home country. We chose to use the consulate in Boise, Idaho since we knew we would be spending time there and because it is a small office. They don't have a backlog of visas they are processing.

In order to get an appointment, we had to complete an application, turn in our financial records to prove we wouldn't be a drain on society and send copies of our passports. At this point they scheduled us for an appointment.

For our appointment, we needed passport photos, photocopies of our passports, a printed application, printed financials and $80 US cash.

We dressed nicely and went in with loads of patience and smiles.

The officer who helped us was very efficient and kind. Asking a little about our situation, but mostly concerned about the paperwork. He asked for a marriage license since my name wasn't on our financials. Of course that was on the boat in Mexico, so we panicked for a minute. I told him I could email it the next day and he said that would be good enough. In addition we gave him our TelMex Wifi bill that had our Mexico address on it. It wasn't required, but he said it couldn't hurt to add to the pile. While we sat and waited, we were also able to pull up my teaching retirement account and email that to him. It turns out he was going to let it slide and give permanent residency to us anyway.

Ironically, the consulate office is 2 blocks from my childhood home!

After a bit, he took our pictures and finger prints and $88 fee (the fee had recently increased, but in Boise we could pay in US dollar, peso or card). He then had us wait some more while he passed it by his boss to make sure everything was in order. After about 45 minutes, he came out and said 'there has been a problem'. We momentarily panicked. Then he grinned and handed us our passports with 30 day Mexican visas inside.

At this point, we had 30 days to return to Mexico and continue the process there. Fortunately I was returning the next day and Pat, a few days later.

The Process in Mexico

When I came into the country the next day, still in the tourist line, it was important that I showed the immigration agent my 30 day visa and that he check 'Canje' on my immigration form. Canje means exchange, so basically my 30 day visa needed to be exchanged for a permanent one within 30 days. Many people have come in the country during this process and not pointed out their 30 day visa. If the agent stamps it wrong, the process is voided and needs to be started again outside of Mexico.

That same night, I began the paperwork for my Permanent residency. This includes an online application, a form with my basic information (including my tattoos, religion and physical characteristics), a letter stating my intention, a map of where I live (we used our main marina address), a privacy form, a bank form and photocopies of my passport, 30 day visa and immigration form that I had completed on the airplane. All this had to be in Spanish.

The next morning, I went to the INM (Mexican Immigration office) in Nuevo Vallarta which is just a few blocks away. Basically, it was a long process of paperwork, waiting, signatures, and running around. 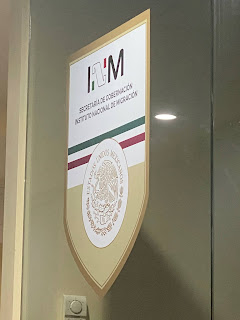 7:16 am - I walked to the INM office .6 km away from the marina in Nuevo Vallarta
7:26 am - I got a number to be called after 9:00 - I was number 3
7:28 am - I walked back to the boat to do some chores
8:45 am - I walked back to INM - it was starting to get hot and humid
9:25 am - I was called up to show my papers. My online application didn't have my middle name, so I sat down on my laptop to redo the online application. They needed a printout and the copy shop in the INM office was closed.
9:35 am - I walked back to the boat to print it (getting hotter now)
9:45 am - I got in my car and drove to the INM office to turn in my new printed application because it was stinkin hot at this point
10:00 am - I was told I needed to go downstairs to pay the $5379.00 peso fee ($266 US), get a receipt and photocopy that.
The bank downstairs wasn't accepting payments that day, so they sent me down the street to a bank by the boat to pay. I drove there, I paid, got my receipt, returned to the boat to photocopy the receipt and drove back to INM. (thank goodness for AC!)
10:25 am - I gave them the receipt and was asked to sit and wait. I received an email saying I've been entered in the system - Yay!
10:30 am - I was called up to check the data on my paperwork, was given a CURP (national ID number), fingerprinted, photographed and one more signature.
10:40 am - Waited some more

11:03 am - I was called up, congratulated and handed my Permanent Mexican residency card! After 3.5 hours, 9,284 steps (my watch counted it) and about as many signatures, I did it!

Pat came home a few days later and only had 2 days that he could go through the process before needing to fly out for work. If he flew out without doing this whole process, the 30 day visa would have been voided. Fortunately, It was smoother the 2nd time around. Pat was pretty much in by 9:00 (he had #1) and done by 10:15.

Now we can stay in Mexico as long as we want, work if we want to, and cross the border into Mexico even if it closes like it nearly did last year. We are proud and honored to be Permanent Mexican residents and grateful to those who helped us through the process.

Things a Mexican resident can do (from mexperience.com):

Permanent Resident cardholders have the following rights and obligations:

• All the rights enjoyed by temporary residents, e.g., car registration, access to social security, travel freely in and out of Mexico, etc.;

• No need to renew the Permanent Residency status, it never expires. If the holder is less than three years old, he or she will have to renew every year until reaching 3 years of age; and then every four years until reaching the age of 18.

• The right to engage lucratively in any legal activity without having to request the INM’s permission. Notification of job changes is still required. If you are working under a professional designation (as an engineer, architect, etc.), you may be required to file your degree at the Dirección General de Profesiones. Check with your local INM office for details.

• Permanent residents cannot own land directly if it is located within 50 kilometers of the beach or 100 kilometers from the Mexican land border, but they can own property near beaches and land borders through a trust, or through a Mexican corporation and have legal right to the property in all but name.

If anyone needs advice on the process or to hear more about our experience, let me know! Contact a consulate in your home country to start the process and this link is the government page in Mexico with guidelines once you have your 30 day visa:

Read more about our adventures at www.mvnoeta.com 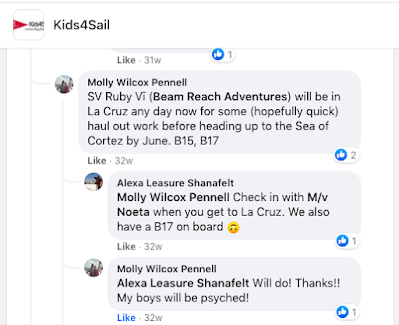 Cliché warning...It's Not Goodbye, It's See You Later