It's been a long time since I gave you all a basic update about what the Noeta crew and family have been up to. So, we'll pretend this post is like the Christmas card you get from your Aunt Judith telling you all about her kids, grandkids and puppies....but in March. So here goes:

Patrick: Over the past year, in addition to flying out of Mexico each week for work, Pat has done a BUNCH of boat projects. We are finally to the point where we spend more time (and money) on making the boat better, instead of just fixing things that are broken (of course we're doing that too). Some of the projects include:

It's not all work for Pat. We celebrated his birthday with a hilarious drag show, had friends visit and we still manage to sneak in beach, dock and drinks every so often.


Alexa: I spent much of last year volunteering for Sea Shepherd, the marina and for community events. As an onshore volunteer for our region, I help as Sea Shepherd boats as they pass through the area. Sometimes I run to grocery stores for crew, other times I work at Sunday market selling merchandise. I pick crew up from the airport, mail packages, help at informational movie nights and connect crew with workers from town. It has been super satisfying to help the conservation and educational cause. While our most recent ship, research vessel Martin Sheen, has taken off, I'm sure another ship will show up and hopefully need some help. If you want to read more about what the Sea Shepherd is doing in Mexico, watch National Geographic's Sea of Shadows (HULU, Amazon Prime, National Geographic) or read a recent article here: https://www.theguardian.com/world/2022/feb/11/tiny-vaquita-numbers-less-than-10-can-they-be-saved


Mikayla: Our oldest child, who lives near San Francisco, has been rocking the Science world. She is a senior research associate working with Frontier Medicines. The company's site says they enable "breakthrough medicines for patients by unlocking the proteome to small-molecule interventions against otherwise undruggable disease-causing targets." That's super smart Science people language to say they are working to create medicines for patients who are 'undruggable,' meaning they don't react to medications in the way they should.  Mikayla is also first author on two papers about black widow spider silk and third author on yet another paper.  She has an amazing group of friends and comes to visit us in Mexico any chance she gets. 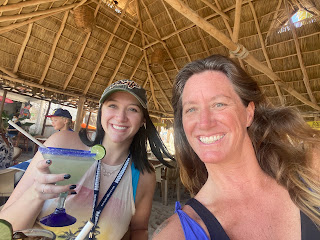 Eli: Eli is our middle child. Many of you knew him as Hailey. He has changed his name and now identifies as male. We are incredibly proud of him for following his true identity and while we know there are challenges ahead, they are nothing compared to the struggles he felt as the wrong gender. Eli has been taking mostly art courses at Whatcom College in Bellingham and looking for work (anyone have any leads?). He plans on graduating with a degree in Visual Communications next year, then we'll see where life takes him. We have also printed a collection of Eli's art on merchandise for our little Mexican town. Right now we sell shirts and stickers at a local store, and a variety of other La Cruz (and Gilligan) items on Redbubble. Check it out!

Jack: Jack, who turns 18 this month, is still on the boat, finishing up his senior year of high school. He also just registered for his final quarter of community college at Tacoma Community College. He will finish high school in the Spring with both his high school diploma and his Associate's Degree. Such a huge feat! In the Fall, he will start at Boise State University, where he has joined the Games, Interactive Media, & Mobile Tech (GIMM) department. We are super excited for him.

Gilligan: Our Fat Boat Cat is now almost 5, having lived his whole life on boats. He spends the majority of his day sleeping and eating. He has not had any accidental swimming events in the last 12 months (knock on wood) and usually stays on or near Noeta.

While it's a little late to say Merry Christmas and Happy New Year, let's just say I'm 9 months early for wishing you the best next year.