For the first summer since we've been in Mexico, we are staying in La Cruz instead of heading to Paradise Village in Nuevo Nayarit. We've traded the multiple pools, potable water and weekly pump-out, for a quiet fishing village, weekly pool volleyball, Thursday movie nights and lots of local restaurants.

The anchorage that has 40-50 boats in the high season, has 2-3 sailboats right now. The village's restaurants are on summer schedules, closed some days and with shorter hours. The cruisers that stick around for the summer are a hardy group, dealing with the heat and humidity. And then there are the storms. The evening lightning storms are fantastic to watch and listen to. Sometimes we get caught in the downpours, other times, we just sit back, watch and have another drink. They are pretty amazing. 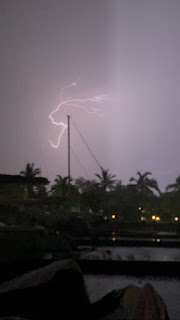 For as long as we've owned boats, we've been a 'kid boat'. When we sent our youngest, Jack, to the States in June to get a job and live with grandpa before college, we began a new era.  While we do miss having our kids around, the boat feels bigger, there is lots less laundry, I go to the grocery store a lot less, and it stays much cleaner.  Here's to a new chapter!

We have managed a couple of trips so far this summer.

We went to Victoria, Canada for a Nordhavn rendezvous where there were over 67 Nordhavns. There were workshops, social hours and lots of cocktails involved. Our friends on Adagio let us stay aboard with them on their lovely Nordhavn, so it was kind of like being home. :) 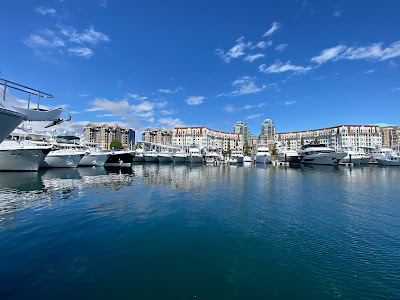 Next we went to Las Vegas to join my little sister at her company party. It was pretty over the top with hair and make up stations, IV Hydration station, manis, pedis and massages, barbershop, food and drink all included. Oh, did I mention we got to meet and see some amazing performers! Poolside concert with Bruno Mars, formal dinner with John Legend and DJ dance party with DJ Diesel (AKA Shaquile O'Neil).

For the first time in 5 years, we are short-term land-lubbers. We are house and cat-sitting for a friend's boutique hotel for the summer, while it's closed. It's just minutes from the marina where Noeta is and offers lovely storm viewing and a much-needed pool. Gilligan the Fat Boat Cat has adapted nicely to dirt, but is still a little skeptical of grass.

*Summer Sailstice Umbrella Downwinder - In this event, you have to navigate around the marina to the finish line, using only umbrellas and wind. I came in pretty much last - that's what I get for not being a sailboater. If you want to see the event in action, check out the Video that my friend Sandra made!

*Trash Clean ups - We do these pretty much every Saturday. This time of year it's extra important to get the trash off the beaches and out of the arroyos so the rain run-off doesn't sweep it out to sea.

The marina held 2 cook-offs this summer. While I didn't win any, Pat was pretty happy being my helper in the test kitchen. Ironically, the chicken wing cook-off was won by a vegan restaurant who made up a cauliflower wing...

Our son Eli came to visit with Megan, his best friend from elementary school. We spent a week cruising, eating tacos, reminiscing and getting him a tattoo kit set up on the boat.

One evening just as we were making cocktails on the boat, we heard an urgent call for help on the VHF radio. A gentleman in a nearby apartment complex was extremely ill and couldn't get up to reach a phone, but he had a hand-held VHF radio within reach. He needed a way to communicate to the security in his building. A few cruisers responded, but we had a car and I knew where the complex was, so we sped up there. We notified security who let us in, and then hurried up to his apartment. Another security guard met us there, but we couldn't get in the locked door. We could still communicate with him on the radio, but the man needed an ambulance quickly. With no key to enter, as the ambulance was on its way, Pat nearly shattered the glass on the door with a fire extinguisher. But at the last minute, the man was able to crawl to the door to let us in. Shortly after, a very efficient paramedic team arrived from Punta Mita along with another couple who knew the man and his family. While taking his vitals, his blood pressure crashed and he lost consciousness. They got him in the ambulance and sped off, with the other couple following him. We found out the next day that he had gotten severe food poisoning from ceviche. He had become completely dehydrated. Happy to report that he is home and better now. A couple things learned - 1) the hospital and paramedics from Punta Mita are efficient and did a great job 2) don't eat ceviche in the summer months - the sea water here is just too warm and 3) keep a handheld radio charged and nearby.

As a side note, all of the community that heard and responded to the call were concerned and willing to help however they could. Most of us did not know the man, but in a tight-knit community such as ours, people do the right thing and help. It was encouraging to see the support.

Pat and I continue to work, him by commuting weekly to Los Angeles, and me (part-time) as an online educational consultant for Edgate. While Pat is off flying airplanes, I write lesson plans, align educational courses and texts to state standards and do other contract work revolving around education. We have a few more years of this setup, while the kids finish college. But there are worse places to be stuck working!

We have dozens of projects on our list for the summer. Here are some of what we've accomplished so far:

We had a local welder help us design and create a new boarding ladder. This one is better for diving and can be released from the water. Of course since we're drilling holes back there, we will also be adding a new cockpit shower and some handrails too.

We recently installed Starlink and it is fabulous. It allows us to access satellites to bring high speed wifi into the boat. It's a game changer. 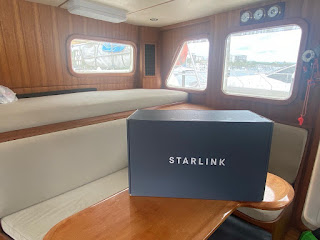 We added a new decorative wall behind our stove. Previously it was mirrored (like the sliding doors), but we used a peel and stick tile to brighten the place up a bit. 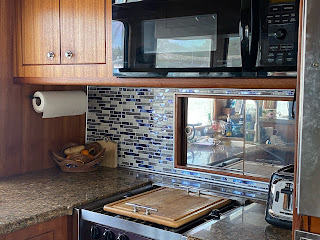 We changed our homeport from Boise, ID to Gig Harbor, WA. We still need to do it on paper, but the boat is ready to go! 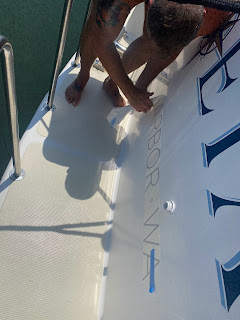 Summer is just part way over, so there are still plenty more projects to do, visitors to visit and trips to be had.  Here's to hoping you are having a productive and enjoyable summer too!