Gig Harbor to Crescent City - An Unplanned (but necessary) Stop

Our first adventure into the open sea was not as boring as we had hoped. We left Gig Harbor full of energy and ready to take on the Pacific. She reminded us who is in charge...

Day 1 - Tuesday, July 12th - Gig Harbor to Port Townsend
Today was a typical Puget Sound cruise. We had a great current carrying us 10-11 knots, which is remarkable, since we normally cruise at 6-7. We left at 5 am to a wonderful honking of boat horns (thanks Mikayla and Jim), Mount Rainier was out for the send off, and we were in Port Townsend, Point Hudson Marina by lunchtime. We walked around town, cleaned up and got ready for the next day. At this point I was looking for the seasick patches, we had dropped off a prescription for 8 boxes, knowing that Jack and I tend to get sick in big waves. I tore the boat apart looking for them. Then I called the pharmacy to see if I had picked them up. You see, I had dropped off 8 prescriptions at a time for off-shore meds (pain killers, diarrea meds, stay-awake meds...all sorts of things), one of which were Scopamine patches to put behind the ear for sea sickness. They are THE thing to have when cruising. The pharmacy informed me that they had never filled that one - so sorry, but they could have it filled the next day. Not helpful. So Pat hiked the 4 mile round trip to the local Safeway and bought every Dramamine bottle they had - it was the drowsy kind, but better than nothing.

Day 2 - Wednesday, July 13th - Port Townsend to Neah Bay
With Dramamine on board (and in my system), we cast off at 5 am again to a beautiful sunrise. Today was going to be about 10 hours, but all new coastline for us. The first 5 hours was a little choppy, not bad. But about half way through, where the Pacific Ocean meets the Straight of Juan De Fuca, it became a washing machine - 3-6 foot swells with waves on top  coming at us from every direction. This continued for 4 hours, all the way to Neah Bay. Jack and I got sick and were in a prone position much of the way. We gladly pulled into Neah Bay around 4 pm, anchored in the harbor with 20 knots of wind with choppy waves, but choppy water was way better than what we had been in. No one felt much like eating, so we snacked and then slept hard.


Day 3 - Thursday, July 14th - Neah Bay to SFO (at least that was the plan)
We started the day by starting the generator so we could make water and recharge everything. The generator promptly overheated. Pat worked on it, he thinks it was sucking air, there was no gasket on the water pump. He added one, released what might have been an airlock, put everything together again and there was no overheating. Generator ran. Now we were able to make water - so we added 60 gallons to the tank (it holds 165 gallons).

By 8:45 am we left Neah Bay. After the experience of the waves from the previous day, we put the paravanes out and dropped the stabilizers (we call them the 'fish'). These would keep us from rolling from side to side quite so much. The paravanes drop away from the boat like wings, then a chain drops down about 20 feet, at the end of each is a stabilizer. These stabilizers cause drag when the boat is pulled one direction or another (see the pic as an example).

We headed out about 10 miles off shore. Again, it was rolly with 3-5 foot swells, but we knew this part would be rough. Again, Jack and I got sick. We passed a few barges heading north- other than that, it was just blue water and a faint coastline.  We did discover that our water tank was empty. Pat had accidentally bumped a valve when he was in the engine room working with the generator, sending all 165 gallons overboard. Fortunately we had another full tank to work from.

The video shows the average wave and swells - hard to show on a video.

Day 4 - Friday, July 15th - Pacific Ocean, Washington coast
Still rolly, but we all started feeling better.  We still weren't eating any of the dozens of meals I had prepped, we weren't up for big meals, and it was too hard to even heat up food in the ocean conditions. We saw 2 whales heading north and started seeing albatross. We even saw an inflated green mylar balloon floating on the surface, 11 miles from shore :( The other thing we started seeing was crab pot buoys. They were different colors and in all different depths, no way of knowing when you might come up on one. We did NOT want to run into one of these.

At 10 pm Pat came up to take his shift at the helm. I updated him on the conditions and other happenings from the past 6 hours - nothing much to note. Just as he was getting set up, we heard a clanking noise from the port (left) side of the boat. I looked out the window and saw that one of our stabilizers had scooped up a crab pot. This is exactly what we didn't want to happen. Pat slowed the boat and ran to pull the stabilizer in. Meanwhile, it's dark and really rolly. I grabbed him a life jacket, a boat hook and a big knife. Jack and Hailey helped pull in the stabilizer while I kept an eye at the helm and brought the boat into neutral, since we were still pulling the weight of a crab pot that was over 200 feet down. I came back to help pull the stabilizer on board, and between the 4 of us, Pat was able to clear the line away from the stabilizer and set us free. He put it back in the water and continued his 6 hour shift with Hailey in foggy weather, on the lookout for more pots. I promptly puked. Not a great way to end the day.


Day 5 - Saturday, July 16th - Oregon Coast
I came on for my 4 am shift and was told that our antenna mount had broken and the antenna was lying against the paravane. We discussed this and decided it wasn't safe for Pat to go up on the roof to fix it, so we just tied it onto the railing and Pat went to get some sleep. Hailey stayed on to work some of my shift with me. It was foggy, and consistently rolly, but I was feeling better. I had an uneventful shift.


At 10 am, Pat came up to take Noeta around Cape Blanco. This cape can be a challenge, and she proved that to us. We were in swells where, standing, Pat couldn't see the top of the wave. He figures it started out as 4 foot waves every 6 seconds, then they built to 7 feet every 7 seconds, then some swells that even reached 10-12 feet. On top of those there were 2-3 foot wind waves AND a cross swell. Jack spent most of it sick and I tried to sleep so that I didn't - I just got a little green. When I came up for my shift, Pat said 'We're going in'. That was a great decision. We decided on Crescent City, a port that you can enter in any weather. However, we wouldn't arrive until after dark. That is something all boaters know, don't enter an unknown harbor at night...we decided we needed to do it. Of course it was also low tide and no moon for light. We got to the harbor entrance at 10 pm and lined her up to head in, fortunately it was well marked. Pat hauled in the stabilizers while I steered (and had a near miss with a large floating channel marker) and then he got back at the helm. I went up on the roof and brought in the paravanes arms, put out fenders and lines. We were all a little weak, from lack of decent food and fatigued.  Pat brought us into our assigned slip, Jack and Hailey handled the lines, and we tied her up like pros. 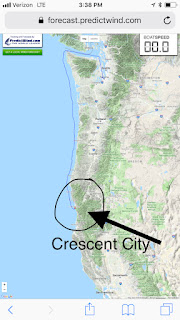 I nearly got sick again on the dock, because it wasn't moving. Everyone was a little delirious and happy to be tied up in this little fishing town. We debriefed the passage, ate a little and then slept hard.

Day 6 - Tuesday, July 17th - Crescent City
The people and local fishermen have been a wealth of information and help. We are having a mount for the VHF antenna shipped to the marine parts store. It should arrive tomorrow. We're cleaning up the boat, adding water to an empty tank and fixing a few other 'issues'. The best thing is that our friend Dave is picking up my seasick meds from the pharmacy and overnighting them to me here! (Thanks so much Miyake!) While we hope not to encounter conditions like what we just went through, we will be ready just in case. We will stay here for a day or 2 and then maybe harbor hop down the coast, maybe stopping in Eureka next and watching the weather at the upcoming Cape Mendocino. Fishermen here say it will likely be a lot like Cape Blanco was - so we want to be there at the best possible time.

The positives:
1) The entire crew never complained once. The kids were troopers and jumped in anytime they could. Everyone kept their sense of humor.

2) We have just completed what many say is one of the most difficult passages anywhere. The Washington/Oregon coast is rarely an easy passage. If we can do that, we can go anywhere, right? :)

3) Noeta handled it all like the pro she is. In even the worst conditions, I never once doubted that she wasn't up for the job.

4) We had some great family time, between the sick bouts, and listened to some excellent audio books (Trevor Noah: Born a crime, Calypso (David Sedaris), Where the Red Fern Grows, Steven Wright (not a book, but great comedy)

5) A few valuable lessons were learned (double check all of your prescriptions, check your arrival time so you don't show up at night, watch out for valves that dump your water overboard, get some better lights to search for crab pots - and again, make sure you have your seasick meds)

We're all fine and in really good spirits today. Now we're off to find a cheeseburger in our current paradise!