I'm Related to the Founder of Rhode Island!...By Hailey

We spent a few weeks in Rhode Island waiting for a good weather window to head to Florida. Just about every time we passed something that said Roger Williams, my mom or I pointed it out. I even had to take a picture in front of the Roger Williams University sign. The reason for this is that my grandma Sally says we are related to him on her side of the family. Now normally I’m not a fan of dead white guys, but Roger Williams, was a cool guy, and I’m possibly related to him. 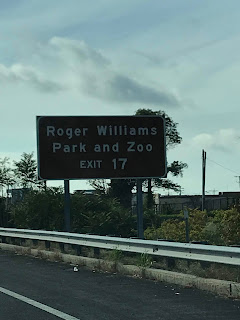 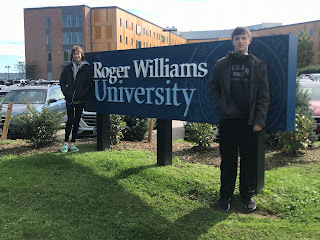 Roger Williams was a religious and political leader in the mid 1600s. He was born in London in 1600 and he was mostly remembered for founding the state of Rhode Island which is where we stayed for a few weeks in October. Roger Williams was a strong advocate for the separation of church and state. He also believed that Indians had the same right to the land as the Englishmen. This idea got him banished from Massachusetts. Since this was Colonial America, he was a Puritan, but I guess some would call him a liberal puritan. He learned the Native Algonquin language and traded fairly with them. He and his followers settled on Narragansett Bay after purchasing the land from the Narragansett Indians. Rhode Island became a kind of haven for Baptists, Quakers, Jews and other religious minorities because of his beliefs. A century after Williams’ death his ideas of separation between church and state were put into the Bill of Rights. While I don’t believe we have a complete separation of church and state in our country yet, I am proud that I have an ancestor who was such a strong advocate for it and attempted to negotiate fairly with the native people.
Hailey