Why would you ship a Nordhavn!?

A Nordhavn can cruise anywhere. So when we decided to ship Noeta from Florida to Mexico, the first question we got was 'Why don't you just cruise it to Mexico?' Believe me, we wish we could have. If time were no issue, we definitely would have. But seeing as how it took us a month to get from Rhode Island to Florida, it was definitely going to take us a lot longer to get from Palm Beach to Puerto Vallarta. That would be fine, if Pat didn't need to get to work weekly.

So, because of time, we needed to ship a Nordhavn from the Atlantic Coast to the Pacific. How does that work? Well, it's like nothing I've ever tried to organize. There are transport ships constantly cruising around planet. It was like trying to hit a moving target blindfolded when it came to picking which ship, what location and what date we were going to ship Noeta. First we thought we might ship out of Rhode Island the end of October, but we needed to have work done on the boat, and wanted that work done in Palm Beach. So then we thought we would ship out of Palm Beach at the end of November, but it took us too long to get to Palm Beach. Finally, we picked a boat that was leaving from Port Everglades, but the date slipped from mid December to the end of January. Here are the steps to shipping a boat: 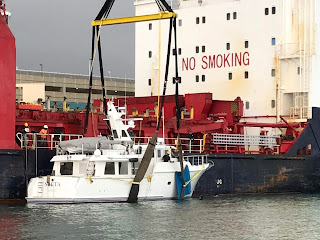 1) Talk with brokers - they sell space on transit ships. They don't necessarily know when or where a ship is going to be, but they can give you estimates. It's not cheap to ship a boat, one our size is around $30,000. Brokers charge different prices for the same spaces on the same ships. We considered the shipping cost to be part of the cost of the boat when we bought it, so there were no surprises. We were told it would take about 10 days to get from Florida to La Paz, Mexico.

2) Once a broker gives you a date and location you like, you sign a contract and pay 10% of the shipping cost. We waited until there was a 'named ship', meaning it was for sure heading our way and the broker was selling space on an actual boat, not just a possible boat. We went with Raven Shipping (but also talked quite a bit with Seven Star) out of Canada. Raven was very good at communicating with us consistently and the president, Anthony, answered our questions promptly. Once you sign a contract, you are locked in. If another broker gives you a date or location you like better...too bad, you're stuck with the ship you signed the contract with.
3) Wait. Daily, watch Marine Traffic as your boat moves, or doesn't, towards your loading port. We watched as ours, Ellensborg, lost it's steering gear near Quebec and our ship date got pushed back. We made our way to Port Everglades on Noeta once we saw Ellensborg get closer. We were given a loading time of 7 pm on January 24th. Leading up to January 24th, as we waited in Port Everglades, we cleaned the boat, ate all of the perishable food, bought spares and boat parts we wouldn't be able to get in Mexico, but otherwise, there wasn't much they required us to do. We could have diesel and propane and water on board.

4) Finally it was January 24th in Port Everglades. A windy cold front with thunderstorms were moving in and we were in a very tight marina with million & billion dollar boats surrounding us. The front was supposed to pass around 4 pm, so we would be fine. We checked the kids, the cat and the luggage into the hotel at the marina (very convenient) I put a last load of laundry in the washing machine and we went to lunch. As our plates were set down, we got a phone call - we need your boat here now. Um.....ok, we'll be there as soon as we can! We inhaled our lunch, I hustled to the boat to get the wet towels a few minutes in the dryer, we emptied the trash, videotaped the interior and exterior to record everything on board, we looked at the grey clouds and cast off. Luckily we were in a lull in the storm. 10 minutes later, at 1:00, we were side by side with 460 foot Ellensborg (wet towels still in the dryer).

8 guys jumped on board and 2 divers went into the water. In a matter of 20 minutes, we had all power turned off, solar power on, closed the thru holes to the generator and wing engine, windows and doors locked within 15 minutes (couldn't do anything about the towels in the dryer - just had to hope for the best in a few weeks). They had straps under the boat, and we were whisked off in a tender to watch our home be lifted 50 feet into the air and secured on the top deck just in front of Ellensborg's pilot house. 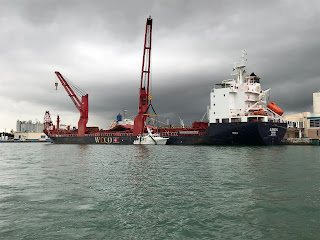 5) Then it was time to wait again. They said it would take 10 days (we figured 2 weeks). Meanwhile, we were sent the contact information of the person in Mexico who would help us with our importation process. We needed a TIP, which allows us to temporarily have a vehicle in Mexico, in order to bring our boat into the country. To get that, our contact, Francisco, needed insurance, bill of sale, a list of items on board, title for the dinghy, Power of Attorney to allow him to manage our TIP, and money. We watched on Vessel Tracker as Ellensborg headed to and then through the Panama Canal. 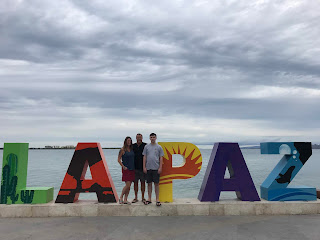 6) We spent a few days in La Paz, Mexico, receiving occasional updates on Ellensborg's arrival. We were told February 6th, then 8th, then 9th. We got to know the town, met other cruisers and waited again. 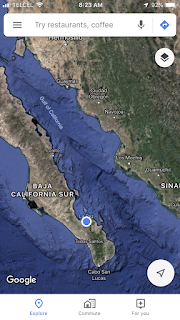 7) Arrival Day! The 9th was a little hectic with different pick up times "4:00 it's unloading, but show up early just in case." We were there at noon "just in case" to be told they were running a few hours late, "so maybe 6:00". By about 4:00, they were only unloading their 2nd boat (we were the 5th in line) and were told they won't unload at night. "You may end up unloading tomorrow, but stand by". We hung out, with all our luggage, looking at nearby hotels, just waiting, for 5 hours. Another boater, with binoculars said, "Hey, I think your boat is in the sling!" Sure enough, just before 6, our boat was being lowered into the water. We hopped in a panga (Mexican skiff) and were whisked out to the ship. Pat turned everything on and opened up thru hulls that needed opening. I videotaped the interior of the boat, to compare it to the first video I took. Everything seemed to be in place, except for a panel that had fallen from the ceiling, and a few things that had fallen to the floor either in rough water or movement in the sling. It was clear that customs had been on board. Our fridge latches were open (they didn't take our beer :) a few bedroom drawers were open and the engine room door had been opened and not secured again.

8) We cruised the short distance to Costa Baja marina to our awaiting slip just as sun was setting. We finally made it to Mexican waters! I can hardly contain myself, we've been working to get to this point for years. The past couple of years have been their own adventure, but now the next stage can begin!

One final video as we pick up Noeta, 16 days after she was loaded onto a ship!
Labels: Video Written by Alexa
Location: La Paz, Baja California Sur, Mexico