It Always Goes Sideways When Pat is Gone

Pat and I make a pretty good team on Noeta. I keep the people fed, educated, clean and mostly happy and he makes Noeta run. Of course, Pat leaves each week to work. That is usually when s#!* goes sideways. Take this week for example. Tuesday Pat left and Wednesday the salon air conditioner stopped working. It's only 92 degrees outside and a lovely 89% humidity.

Before calling Pat, I did some research based on the error message I was getting on the AC panel (code: HI PS). I found out that most likely the AC wasn't getting enough raw water to cool down the system, probably because we're growing something in the tubes or had sucked up a fish or other small critter. I texted Pat to let him know, of course he was in an airplane, so we couldn't troubleshoot too much. It was too hot to do much anyway, so I decided to wait until Thursday morning to crawl into the Lazarette to check the AC pump and hoses.

Thursday morning rolls around (fortunately the ac in the staterooms still work fine), and I go to work tracing tubing, finding strainers and looking for valves that I might adjust to maybe dislodge any blockages.  As I crawl down into the lazarette (since it's also our storage room, I had to empty it first) I inadvertently placed my palm on a large sticky roach trap - didn't know that was there. Of course, Pat isn't able to talk on the phone while this is going on.


After I unstuck myself, I pulled up floor boards and located the AC pump and hoses. I realized I should go turn the AC pump off, so I head up to the pilot house where I now hear the high water alarm. 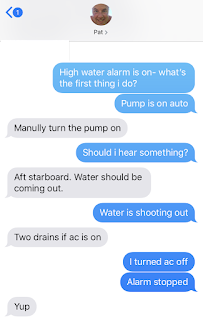 This alarm sounds when there is water in the bilge and it gets too high because it's not getting pumped overboard. After texting Pat to check my next step and turning off the AC in the staterooms, I manually turn on the bilge pump (it should pump automatically, but it must have gotten stuck). I watch out the starboard side as gallons of water come shooting out for a few minutes, then turn the bilge pump back to auto. We had most likely been collecting condensation from running the AC.  I went into the engine room (as per Pat's instructions), found the bilge pump and wiggled around the float and and switch to get it unstuck for future pump outs. While I'm in the engine room I discover a rusty open razor blade after getting a small cut - so that was nice. It's in the trash now, and I cleaned up my finger. OK, another crisis averted. 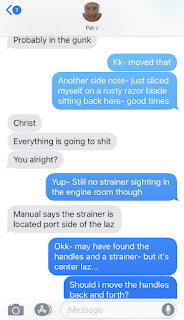 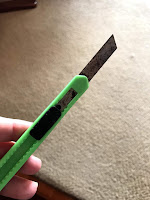 I crawl down into the laz to get back to work on the AC- it's starting to get warm now. Just after finally finding the strainer, there was a huge commotion above my head as Gilligan jumps out of the lazarette and sprints inside, with the roach trap now stuck to his side. When I found him, he had gotten it off his side, and it was now stuck to his paw. 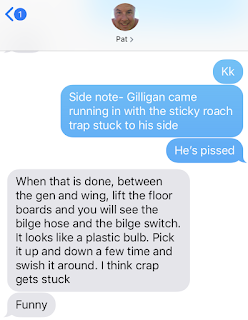 After freeing Gilligan from the roach trap (no poison on it, thank goodness), I crawled back into the lazarette to continue my trouble shooting. Before removing the strainer, I send Pat one more text asking if I need to do anything before removing it. He said,"Close the thru hull before you open it (the strainer)". I still wasn't quite sure which valve would close the thru hull. A thru hull is an opening where water can flow one way or the other through the hull of the boat. If the thru hull is open and I remove the strainer, sea water could come running into the boat. Fairly important hole to make sure is closed before messing with the hoses attached to it. I decided too much was at stake if I screwed up this step, so decided we will live without AC in the salon for a few more days. 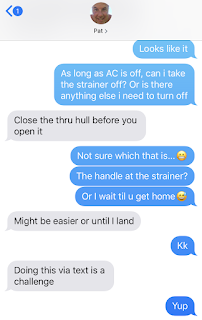 When Pat gets home I will learn how to open and close the thru hull valves. Until then, I'm putting out some new roach traps and trying to stay cool :)

************************************
UPDATE! For Father's Day, Pat got to work on the AC. He showed me how to open and close the thru hulls and where the strainer and rest of the AC components are.
Tools we ended up using:
screwdrivers
wet/dry vac
hand water pump
heat gun
spare stainless hose clamps (cause one broke when checking the hoses of course)
pliers
fan for the lazarette - it's HOT in there

The strainer seems to be the key here. When water is brought in through the thru hull to cool the AC unit, it passes through a strainer that collects any stuff that may have come in with the sea water. Our strainer not only was full of gunk, it also had hard growth barnacles on it. That means it's been a VERY long time since it was cleaned or checked.

It also is likely to be the original strainer (17 years old) since it is deteriorating. We don't carry a spare strainer, so for now, this one goes back in now that it's clean, and we will see if we can find one in Mexico.
Pat then blew air through all of the tubing, just in case stuff was stuck in there. Then we scraped the barnacles from the strainer and the strainer housing. Next, Pat suctioned up the water and barnacles with a wet vac so they didn't get run through the AC unit.

Once everything was clean, we put the fresh water hose into the strainer and turned on the AC units one at a time. It worked! Cold air was blowing into the salon!

We got everything put back together, thru hull open and Pat decided to start on another project....setting up the new transducer (depth finder). That story is for another day. Thank goodness for Pat - he gets dad of the year award today. Happy Father's day to all those dads out there who work so hard for the rest of us!