We Bought a Car! (Then I got pulled over by the police)

We Bought a Car!
(Then I got pulled over by the police) 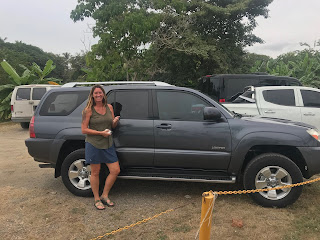 2 years ago, we sold our cars and have used public transportation, Uber and rental cars since then. When we were evaluating our budget, after living in Banderas Bay for a year, we realized we were spending nearly $300 a month on car transportation! Between Pat getting to and from the airport, excursions, grocery store trips and Hailey's social life, Uber was getting pricey.

So we started looking into the process of buying a car. The internet is FULL of information and experiences about cars and Mexico, some of it helpful, much of it not. We found multiple answers to our questions:

1) Can we even buy a car here since we are just tourists?
2) Can we bring in a US car? Does it make sense to do that?
3) Is it possible to get Mexican registration as tourists?
4) How about insurance, do we get it here or in the states?
5) What about license plates, US vs Mexico?
6) Do I need a Mexican license?

It all seemed overwhelming, we heard multiple answers to the same questions and different states have different laws. Fortunately, we got a reference from Adam and Jess on SV Volare to go see Valle Dorado Car Sales in Mezcales. We quickly found the car we wanted (with no salesman pressure at all), a 2004 Mexico City plated Toyota 4-Runner that even has a cassette deck! Victor assured me that 1) we, as tourists, could buy a Mexican plated car 2) we probably don't want the hassle of driving a car down from the states, it requires a TIP (importation documentation) that comes with many restrictions, and insurance is much more expensive 3) He would help me with the registration 4) Insurance would be easy to get 5) We could keep the Mexico City plates or switch to a different state (it was cheaper to keep the Mexico City plates, so we did) and 6) We don't need a Mexican driver's license, but we are welcome to get one if we wanted to.

It all sounded too good to be true.

But the process did take about 6 different trips to the dealership and bank, because nothing is ever that simple. We needed to get a Mexican bank account, so that we could withdraw pesos to pay cash for the car. That took 4 days, a series of interviews, 47 copies of our passport, photos of our boat with a full description of how many bedrooms and what the kitchen was like, finger prints and about 82 signatures. Buying a house in the states takes less paperwork!

Finally, the cash was available at the bank. When Ezekiel, one of our local taxi drivers, heard that I was heading to the bank to get the funds for the car, he insisted on driving me, walking with me into and out of the bank, then driving me straight to the dealership. He didn't leave until he knew that Victor had the cash.

Just like that, I drove the car off the lot just in time for Christmas! Victor told me to come back after January 1st to start the registration process, since registration is good for 1 calendar year (January-December). Meanwhile, I stopped by the Novamar Insurance office (they insure our boat too) and after another 15 signatures and a number of copies of my passport, I had liability insurance through Qualitas for $180 for the year, whew! Insurance here covers the car, not the people. So it doesn't matter who is driving, me, Pat, Hailey or Gilligan - the car is insured. Another interesting thing about insurance and accidents in Mexico, I learned, is that if you are in an accident, even a simple fender bender, do NOT move the car until the insurance adjuster shows up or the police tell you to. It's one of the reasons traffic can get so bad here. If the car is moved, insurance won't get involved.

So January rolled around, I stopped by Valle Dorado again and Victor took more copies of my passport and put together a file to take to Mexico City on their next trip picking up and dropping off cars. He said to check back in a few weeks. This was the part that was making me nervous. I had heard that you could only register a car if you were a temporary or permanent resident. Turns out that isn't true, a few weeks later, Victor handed me my registration card! He said he's happy to help me next year when I need to pay my annual renewal fee.

We decided not to get Mexican driver's licenses for now. Both Victor and my insurance agent said there wasn't any real need for one.

I've gotten pretty good at figuring out how to drive the confusing laterals. These side streets run parallel to the main road. If you want to turn left, you actually have to merge right onto the lateral, wait for a separate light, then turn left from the far right. USUALLY that's the case. Sometimes, of course, a left turn is the same as in the states. You just have to learn which turns are where.


We've also learned that stoplights will flash green 2 or 3 times, then flash yellow and then red. The transition is pretty quick and I know to stop on a yellow. Well this week, on my way home from the store, apparently I missed the stop on the yellow. The dreaded police lights came on behind me in Bucerias. Over his loud speaker, in Spanish, he told me to pull over to the lateral. Surprisingly I wasn't too nervous at this point, I had read a LOT about what to do/not do when pulled over by the police. I was not going to offer a bribe. While the practice is common, (even the National rental car guy told us to have bribe money ready), it's illegal and just reinforces the practice. I knew that I would need to hand over my license, then follow him to the police station where I would pay whatever the ticket fee is and then get my license back.

A policewoman and policeman walked up and asked if I spoke Spanish, I said yes, so he introduced himself and his partner and shook my hand. They were friendly and very courteous. He told me I had run a yellow light, which I truly don't recall doing and I told him that, but that I knew that I am supposed to stop at one. He asked where I stayed, how long I've been here, if I'd had any other infractions (nope!) and then asked to see my driver's license and registration (which I had!). I was very respectful and apologetic but prepared to head to the police station on a little excursion. So I was very relieved when he said they were letting me off with a warning to which I smiled gratefully and told them what great people they were :)

So, I'll be watching the stoplights carefully on my way to pick Pat up from the airport today!

One thing to note that made this process possible, and was just dumb luck on our part, was us getting DSL internet last summer in Nuevo Vallarta. When we did that, we got an internet bill with our name and the address of the marina on it. That bill was used as our address when getting a bank account and for registration. The bank didn't care that we were on a boat, but needed something with our name and a Mexican address. Without having a document with that information on it, we may still be using Uber and busses.